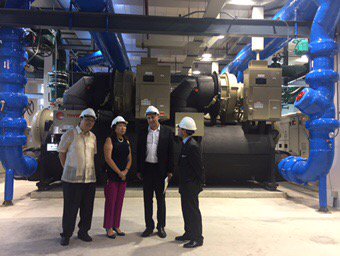 Gotianun-led Filinvest Land Inc. and the local unit of France-based global energy service provider ENGIE are jointly investing P1.5 billion in a district cooling system (DCS) plant in Alabang’s Northgate Cyberzone, the biggest of its kind in the country which can serve over 20 office buildings in this IT park.

This DCS plant – the first phase of which has been completed and inaugurated on Thursday morning – is seen to reduce electricity consumption in the 18.7-hectare Northgate Cyberzone by 40 percent.

This green initiative will be replicated in other Filinvest projects across the country. PDDC president Joseph Yap said in a press briefing on Thursday that the group was now studying to install DCS plants in two locations in Cebu, including Cyberzone Cebu being developed by Filinvest, as well as in other parts of Metro Manila, like Quezon City and Binondo.

PDDC has so far spent P1.2 billion for the first phase of the Northgate Cyberzone DCS plant, which connects 12 buildings in the Philippine Economic Zone Authority-registered IT park, Yap said. The investment will go up to P1.5 billion once phase 2 is completed.

“In total, we will be servicing more than 20 buildings. Currently, it’s connected to 12 buildings. The other buildings are in the process of being built so when they’re done, we’ll service the entire Northgate Cyberzone,” Yap said.

DCS refers to the centralized production and distribution of cooling energy in the form of chilled water which is distributed via an underground piping network to buildings within a district. This is seen to offer a host of benefits, especially in comparison with individual cooling systems. Apart from reducing energy consumption and greater efficiency, DCS is seen to lower initial capital investment and enhance real estate value by freeing up building space for other uses.

To date, the DCS plant in Northgate Cyberzone has the biggest installed cooling capacity in the country with 8,000 tons of refrigeration (TR) for its phase 1 and a total of 10,000 TR when phase 2 is operational.

“We are proud to partner with the world leader in DCS. ENGIE’s expertise in DCS and our state-of-the-art DCS plant will benefit our stakeholders. This project is the realization of our vision to produce a clean, sustainable, and resource-efficient cooling system. It is also our way of reducing our carbon footprint,” he said.

Over the long-term, Yap said PDDC was envisioned to likewise offer its DCS-building capacity to other property developers as well.

Apart from developing DCS, the joint venture company PDDC will engage in project management and operations and maintenance services for existing and future heating, ventilation and air-conditioning projects.

“We look forward to servicing the offices here in Northgate and we hope that building occupants and office workers will begin to appreciate the difference of DCS with conventional air conditioning system, like reduction in noise and vibration. Business owners, on the other hand, should be able to realize long-term benefits in terms of efficiency and reduced greenhouse gas emission,” Yap said.